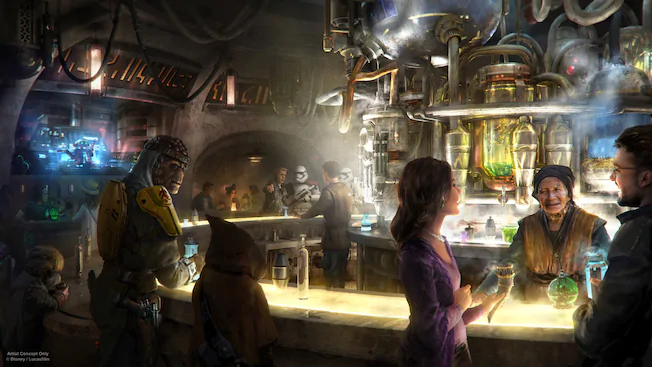 Today is the day that so many people have been waiting for – the official announcement for the opening dates of Star Wars Galaxy’s Edge at Disney World! Disney just announced that the much anticipated Star Wars Galaxy’s Edge will open on May 31st at Disneyland Park in Anaheim, California, and on August 29th in Hollywood Studios at the Walt Disney World Resort in Orlando, Florida.

While Disney is excited to announce that the parks will both be opening a little ahead of time, there is one thing that might upset some. According to their release today, the new land will open up in two phases. In phase one which begins on the dates announced today, guests of both Disney parks will be allowed to:

Live your own Star Wars story and take the controls of the most famous ship in the galaxy aboard Millennium Falcon: Smugglers Run, sample amazing galactic food and beverages, explore an intriguing collection of merchant shops and more.

As for phase two, here is what Disney had to say:

And for phase two, opening later this year, will be Star Wars: Rise of the Resistance, the most ambitious, immersive and advanced attraction ever imagined that will put guests in the middle of a climactic battle between the First Order and the Resistance and will blur the lines between fantasy and reality.  In light of tremendous demand, Disney made the decision to open the land in phases to allow guests to sooner enjoy the one-of-a-kind experiences that make Star Wars: Galaxy’s Edge so spectacular.

Will you need any special reservations?

So, if you will be heading out to Disneyland, we did find out that in order to experience Galaxy’s Edge during the first month of operation, you will need to make a no-cost reservation in advance that will be subject to availability. The good news (or bad depending on how you view it) is that you will not need to make any special reservations to visit the land once it opens at Disney’s Hollywood Studios. You will need a valid Hollywood Studios ticket, but other than that, it will be open to all guests, I must add that they did state that “capacity is limited”. The release today also stated that Star Wars Galaxy’s Edge will be available during extra magic hours.

What are your thoughts?

So many guests have been waiting to plan their vacations around the opening of Star Wars Galaxy’s Edge – either because they wanted to be there from the beginning or they were wanting to avoid it at all costs. How does this affect your plans to visit Disney World? How do you feel about Disney opening Galaxy’s Edge on what will most likely be the first or second week of school for most kids in the US? Will you be there? Let us know in the comments below!

When will Bibbidi Bobbidi Boutique Reopen in 2022?