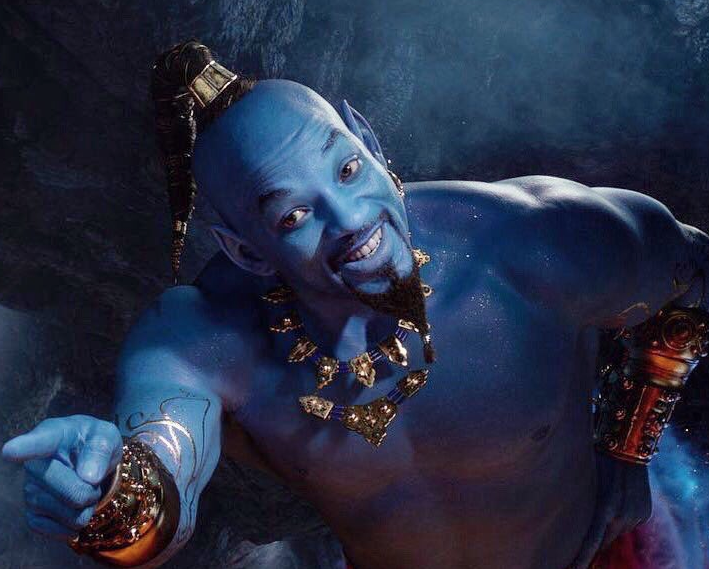 Our Review of Disney’s Aladdin

My family and I just saw Disney’s live-action remake of Aladdin this afternoon. I know that there has been some controversy surrounding this film since Disney debuted the sneak peek trailer many months ago. A lot of people had a problem with how Will Smith looked as the Genie. The genie is blue, so it’s only certain that the people who re-made this film were going to make the actor blue right? So, I’ve heard people talking about how excited they were, and I heard people say, “It is never going to live up to Robin Williams playing the Genie.”  Here is our review of Disney’s Aladdin.

My family absolutely loved it. I don’t think that anything or anyone had to “live up to” the animated classic from the 90s, even though it is a remake. My thoughts are that this film brings forth a fresh and rejuvenated take on a classic Disney movie for kids of this generation. The upside is that people like me, a 34-year mother of two, get to re-live their childhood and all the memories of films that I grew up with. I was so excited to take my kids to see this movie. I’ll admit, my family is huge Disney fans, but my kids (who are 9 and 3) have never seen the original Aladdin, so I wasn’t sure how they would take to it. Within the first few minutes of the film, both kids were glued to the screen and were bopping in their chairs to the song “Arabian Nights.”

The film was wonderfully made with beautiful colors and set decorations of the kingdom of Agrabah. All your favorites are in this film – Aladdin, Jasmine, Abu, the Genie, Jafar, and Raja (although I feel like Raja isn’t highlighted as much as in the animated version). There is also a highlighted focus on Jasmine’s handmaiden and Jasmine’s father, which added elements of humility and humor throughout the film. All the favorite songs are in the film and it stays true to the true story of Aladdin. One of the refreshing things about this film (that kids in today’s world will totally get) was the songs had some definite “Will Smith” vibes to them, especially “You Ain’t Never Had a Friend Like Me” – At one point,  I thought the Fresh Prince was going to make a cameo. My kids, who always dance to a good beat or break down, were b-bopping in their chairs to every song that played. The ending scene is especially fun and energetic.

The actors who play Aladdin and Jasmine did a wonderful job of capturing the innocence of young love, and Jasmine was beautiful. The costumes and jewelry in this movie are very well done, and in every scene that she is in, you cannot take your eyes off her beautiful outfits, jewelry, and makeup.

As far as Will Smith as the Genie? While it was a little funny seeing him very large (swole- like he’s been lifting) and extremely blue, he did a fantastic job of playing the Genie. There are several times throughout the film that he appears in human form, so you get to see classic Will Smith, against scenes of very blue Will Smith – if you remember the animated feature, he was also very large and very blue – so c’mon people, it’s a make-believe movie, cut it some slack.

My family laughed and smiled throughout the entire film. One thing to note – it was a lengthy Disney film, coming in at 2 hours, and 8 minutes, so make sure everyone visits the bathroom before sitting down to enjoy the film, as you don’t want to miss anything. My 3-year-old got a little antsy about the 1-hour 45 min mark, but hey – she’s 3, right? Other than a potty break for her, we were back in our seats and enjoying the show. It has wonderful music, humor, beautiful colors, and overall whimsical appeal. My opinion, especially if you are a Disney Fan like me – go see it, you’ll be happy that you did.