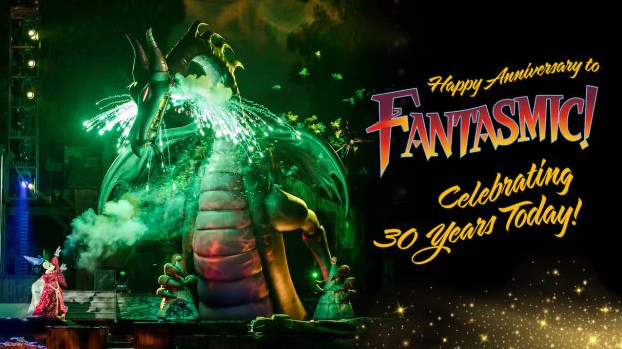 Fantasmic Returns to Disneyland for its 30 Year Anniversary!

We are so excited to share that another magical nighttime show is returning to Disneyland. “Disneyland’s “Fantasmic!” – a nighttime spectacular show, is returning to Disneyland on May 28th. This marks the 30th Anniversary of this wonderful classic, as it first appeared on May 13, 1992, at Disneyland. This is a live show that takes place on the waters of the Rivers of America, with characters and scenes from several different Disney movies, the headliner being Mickey Mouse – who is the Sorcerer’s apprentice, fighting villains along the way. The music is electrifying and goes with the storyline so well.

The last time we saw Fantasmic! was in August of 2019, when we visited Disneyland as a family. We purchased the Fantasmic! Dinner Show package from Blue Bayou Café. We were treated to a wonderful dinner at the famous Blue Bayou Café and had front row seats to see this nighttime favorite. Sitting in the reserved seating section, that came with our tickets as well as a Fantasmic-themed foam cushion to sit on.  Sitting this close, you definitely get a little wet from the projections that occur on the water as well as the different activities happening alongside the boats. We don’t want to spoil too much!

We went in August and even then, in the evenings, it gets a little chilly. We would recommend bringing a light sweatshirt or jacket to wear, especially since you are prone to having mists of water get very close to you.

While no announcement has been made yet about dinner packages returning, most likely Disneyland will return with these wonderful offerings as we are now seeing that they are offering limited dining packages for World of Color over in Disney’s California Adventure.

When Will Fantasmic Return to Disney’s Hollywood Studios?

While Fantasmic! is returning to Disneyland, we are still waiting to learn more about the return of Fantasmic! to Disney’s Hollywood Studios in Florida.  We have heard that there have been some delays with some of the lighting and animation, but they are working to bring it back to life on the east coast.  Once we know more, we will let you know!

Is Disneyland’s MaxPass Worth It?

Family Vacation to the Disneyland Resort